THE COUNTRY’S budget balance swung to a deficit in January, as tax collections continued to drop and spending remained muted amid the pandemic, the Treasury reported on Wednesday.

Preliminary data from the Bureau of the Treasury (BTr) showed the fiscal gap stood at a P14-billion deficit in January, reversing the P23-billion surplus in January 2020.

Compared with December, the January deficit was significantly narrower than the P302.6-billion fiscal gap in December.

The government runs on a budget deficit as it spends more than the revenue it generates. Tax collections have declined amid a slowdown in economic activity due to the pandemic. The government is ramping up spending to drive recovery this year.

Broken down, overall revenues declined by 11.5% to P260.7 billion in January, from P294.6 billion a year ago. Tax collections made up 89% of the total, while the rest came from non-tax sources.

Tax revenues went down by 8.3% from a year ago to P232.7 billion on “continued economic disruptions” due to the ongoing coronavirus pandemic, the BTr said.

Offsetting this decline was the 9.77% increase in tax collections of other state offices to P3.3 billion.

Revenues from non-tax sources such as the proceeds from privatization efforts and other fees and charges, slumped by 31.4% to P28 billion.

The Treasury reported a 34% drop in revenues to P18.7 billion, due to the high base in January 2020 when the central bank remitted P17 billion in cash dividends to the government.

Non-tax income generated by other state offices slid by 25% to P9.4 billion.

Meanwhile, government spending inched up by 1.18% to P274.8 billion in January.

Primary spending — or total expenditures less the interest payments — rose by 8.37% to P227.8 billion that month.

However, interest payments declined by 23.4% to P47 billion, due to the redemptions of global bonds last year and after settling the premiums on reissued Treasury bonds.

The slump in revenues and modest government spending could lead to a slower economic recovery and further weigh on first-quarter gross domestic product (GDP) which is already expected to remain in contraction, Rizal Commercial Banking Corp. Chief Economist Michael L. Ricafort said in a note to journalists on Wednesday.

“For the coming months, continued cautious approach on any additional stimulus measures, just like in 2020, would help temper/limit any further widening of the budget deficit and any further rise in the debt-to-GDP ratio,” Mr. Ricafort said.

The government’s plan to acquire more coronavirus disease 2019 (COVID-19) vaccines this year and the next few years should lead to the widening of the budget gap, as the government borrows more, he added.

“On the other hand, the government’s hands are tied when it comes to more spending as the deep economic scarring from last year means that the tax base remains challenged, and lackluster collections continue to deny the government the revenues needed to do so,” Mr. Roces said via e-mail on Wednesday.

He said this year’s P1.2-trillion budget for infrastructure should serve as the main driver of fiscal stimulus, especially once it gains traction in the second half. 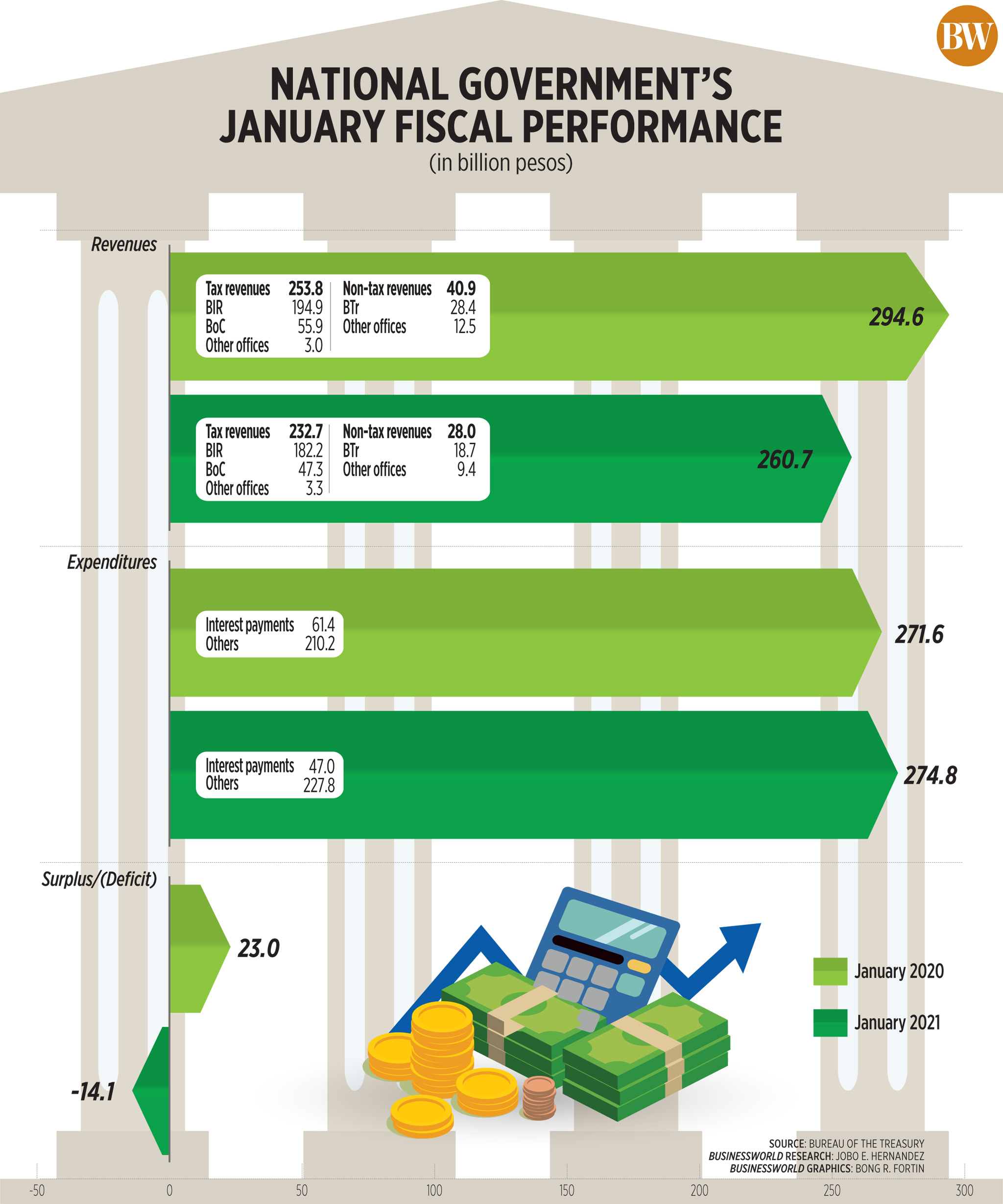