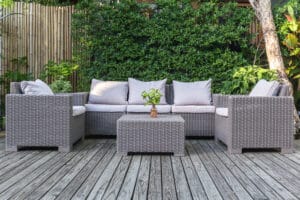 People hoping to spruce up their gardens, ready for when we can socialise in them again, may face problems with their seating plans due to a lack of outdoor furniture.

A combination of high demand and shipping problems is being blamed for the shortages.

Furniture giant Ikea is among the retailers experiencing supply issues.

Companies say that shipping costs to import goods from countries such as China have risen dramatically.

The Leisure and Outdoor Furniture Association, which represents 70 manufacturers and wholesalers, said all of its members are having problems with garden furniture supply.

Gina Hinde from the association said that last year its members were being charged about $1,200 to get a container over from China and Indonesia. This year, they’re being charged anywhere between $7,000 and $10,000.

“Some have even been quoted up to $17,000 to bring one container over,” Hinde added

Ikea says the shortages have been caused by both a huge rise in demand through the pandemic, as people spend more time at home, and problems with its global supply chain.

However, the retail giant says it hopes to have things back to normal by the time its stores re-open.

Rob Mead is a consultant at White Stores, which sells garden furniture online and from its six shops. The company also has a wholesale arm, Nova, which sells to other retailers.

He said that his company spent a month negotiating with freight forwarders last November.

Problems with supply could have a knock-on effect on prices, he added.

“The problem it causes is that it increases the cost price of a product,” said Mr Mead.

“You can’t just increase your price due to the fact that you’re paying more to ship the product – that doesn’t improve the quality of the item itself.”