Remittances slip as pandemic drags on

MONEY SENT HOME by overseas Filipino workers (OFWs) fell for a second straight month in January, as many returned home after losing their jobs amid a coronavirus pandemic.

Cash remittances in January slipped by 1.7% to $2.603 billion from $2.648 billion a year ago, data released by the Bangko Sentral ng Pilipinas (BSP) on Monday showed.

Remittances also declined by a tenth (9.93%) from $2.89 billion in December, when OFWs typically send more money.

The United States remained the biggest source of remittances during the month (40.9%), BSP data showed.

Inflows from the US, Singapore, Saudi Arabia, Japan, United Kingdom, Canada, United Arab Emirates, Qatar, Malaysia, and Taiwan accounted for 78.2% of the total.

January cash remittances sent by land-based workers dropped by 2.4% to $2.044 billion. On the other hand, remittances from Filipino seafarers went up by 1% to $558 million.

Personal remittances, which include inflows in kind also slid by 1.7% to $2.895 billion in January.

The central bank expects remittance inflows to grow by 4% this year, on hopes of economic recovery.

The lower remittance inflows in January was due to base effects as well as the continued repatriation of OFWs, UnionBank of the Philippines, Inc. Chief Economist Ruben Carlo O. Asuncion said in an e-mail.

The Department of Foreign Affairs told a congressional hearing last week that more than 383,000 OFWs have been repatriated since the pandemic began last year.

However, the peso’s recent depreciation trend would benefit OFWs, Mr. Asuncion said. The peso depreciated by 8.5 centavos to close at P48.54 against the dollar on Monday.

“They would want to send more money and ‘get more’ for their remittances. Hopefully, this can contribute to further recovery of remittance inflow growth,” Mr. Asuncion said.

A new COVID-19 variant first detected in the country could also affect the prospects of Filipinos who are planning to work abroad, said John Paolo R. Rivera, an economist from the Asian Institute of Management.

“The new virus strain from the Philippines might be disadvantageous on our part because this might prompt receiving economies to be much stricter in allowing the entry of OFWs in their territories. This will affect deployment, which will affect remittances negatively,” he said in an e-mail.

Japan’s National Institute of Infectious Diseases on Friday said it had detected a new coronavirus variant from a traveler who came from the Philippines.

Health officials said the mutation is distinct from the British, South African and Brazilian variants, but may potentially be as contagious.

COVID-19 infections have surged in recent days. The Health department reported 5,404 new cases on Monday, bringing the total to 626,893. This was the highest single-day tally since August. 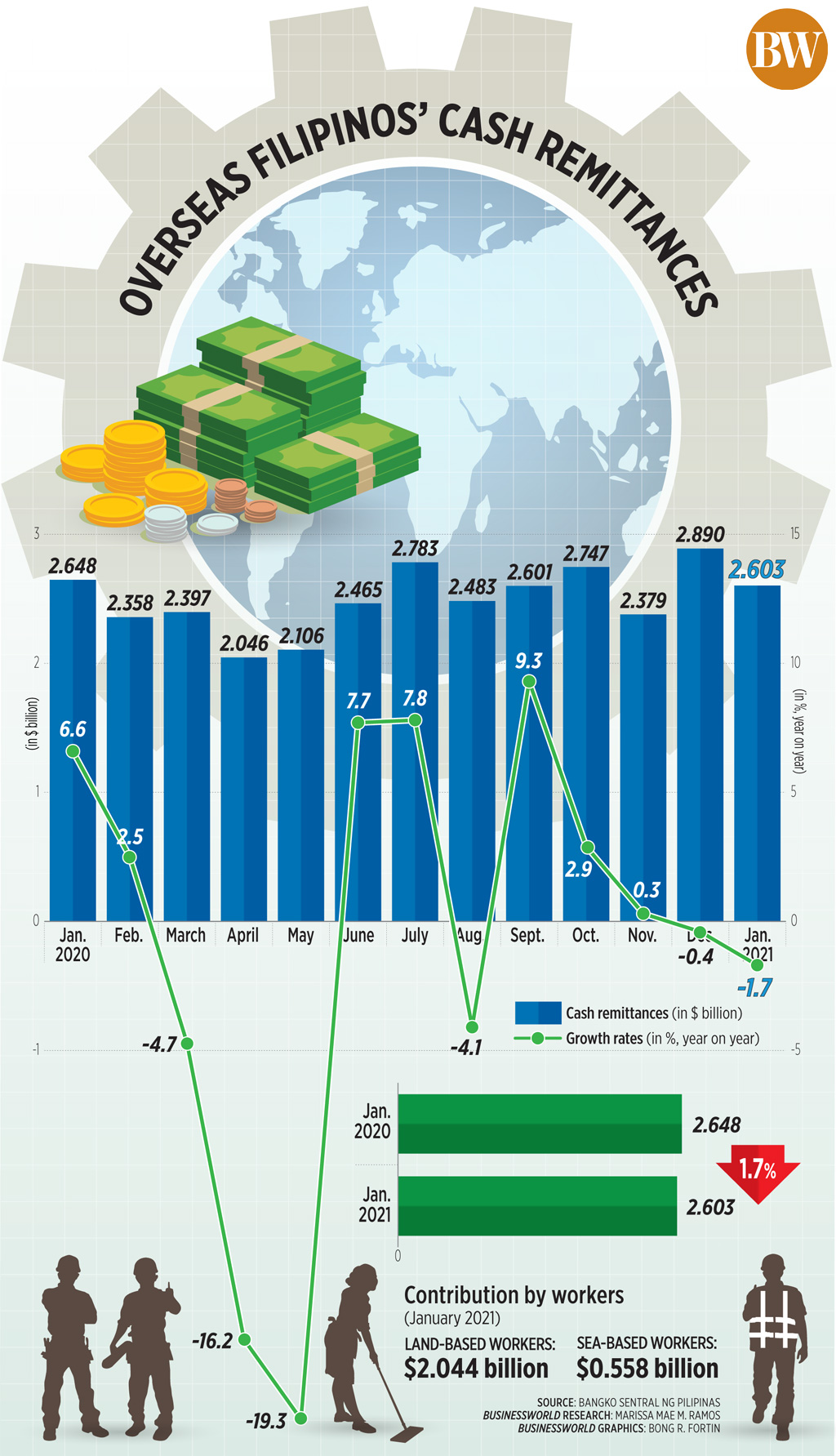