Ahmed Najm: We Need to be Actively Anti-Racist 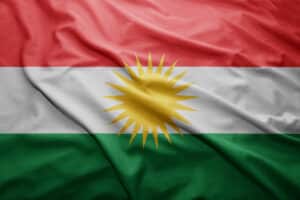 The internationally acclaimed Iraq photographer speaks up about the burning of a Kurdistan flag.

Ahmed Najm is the big name behind the Metrography Agency – the first photo agency ever to appear out of Iraq. Long term proponent of religious rights and innovative mind behind the “Humans of Kurdistan” series, Ahmed is the perfect example of the proverbial small-town boy growing up to change the world.

In October of 2020, we saw some frightful images emerge from the Metrography agency, which featured protestors burning a flag. As a Kurdistan resident and an avid supporter of the growing community there, these images moved the internationally renowned photographer to anger.

Ahmed Najm has an illustrious career as a photojournalist, helping us understand the devastating impact of the war on ISIS in the middle east. His work on the Kurdistan photo series’s humans has drawn attention from the four corners of the globe. His establishment of the community-focused Vim Foundation in his hometown of Sulaymaniyah has proven his commitment to his community.

However, that commitment was tested to its limits when local radicals stormed the offices of the local Kurdistan Democratic Party (KDP). Supporters of Hashd al-Shaabi, known as the Popular Mobilization Forces (PMF), broke into the government building to perform the heinous act of flag burning.

The crime was increased in severity due to the PMF having a strong association with the Iran-aligned Shia Militias. The act of flag burning was a racially charged attack, motivated by hatred.

In a government statement, the authorities blamed an illegal force for entering the KDP offices and burning the ‘sacred’ flag. The Kurdistan parliament expressed contempt for the actions of the intruders and reassured the public that they had their best interests at heart by way of this statement.

What it Means to be Anti-Racist

Ahmed is a known protestor against racial discrimination. In one Tweet, he wrote:

“In a racist society, it is not enough to be non-racist. We must be anti-racist!”

But what does it mean to be anti-racist? How can we implement a better, more accepting frame of mind in our day-to-day lives? Ahmed Najm has a few suggestions.

Being anti-racist is about taking an active stance to interfere when we see it happen as we go about our lives. Racism can be encountered anywhere, be it on the bus, in the supermarket, or a flag-burning act of heinous intent. To be anti-racist, we must flip the whole scenario on its head. We must be so offended, so affronted, and so violated by witnessing an act of racism, that we are forced to speak out.

To be anti-racist is a little like being a vegan in a world of meat-eaters. People aren’t going to like you because they don’t want to have to change their ways. Nevertheless, we have a moral responsibility to speak up, act on it, and prevent it by any means possible. Whether that racism is an all-out flag burning or just a passing comment on the street.

Read more:
Ahmed Najm: We Need to be Actively Anti-Racist