ANNUAL INFLATION quickened to a 22-month high in December, driven by a surge in food and transport prices during the holiday season, the Philippine Statistics Authority (PSA) said on Tuesday.

The rate was higher than the 3.2% median estimate in a BusinessWorld poll last week, and near the high end of the 2.9-3.7% forecast given by the Bangko Sentral ng Pilipinas (BSP). 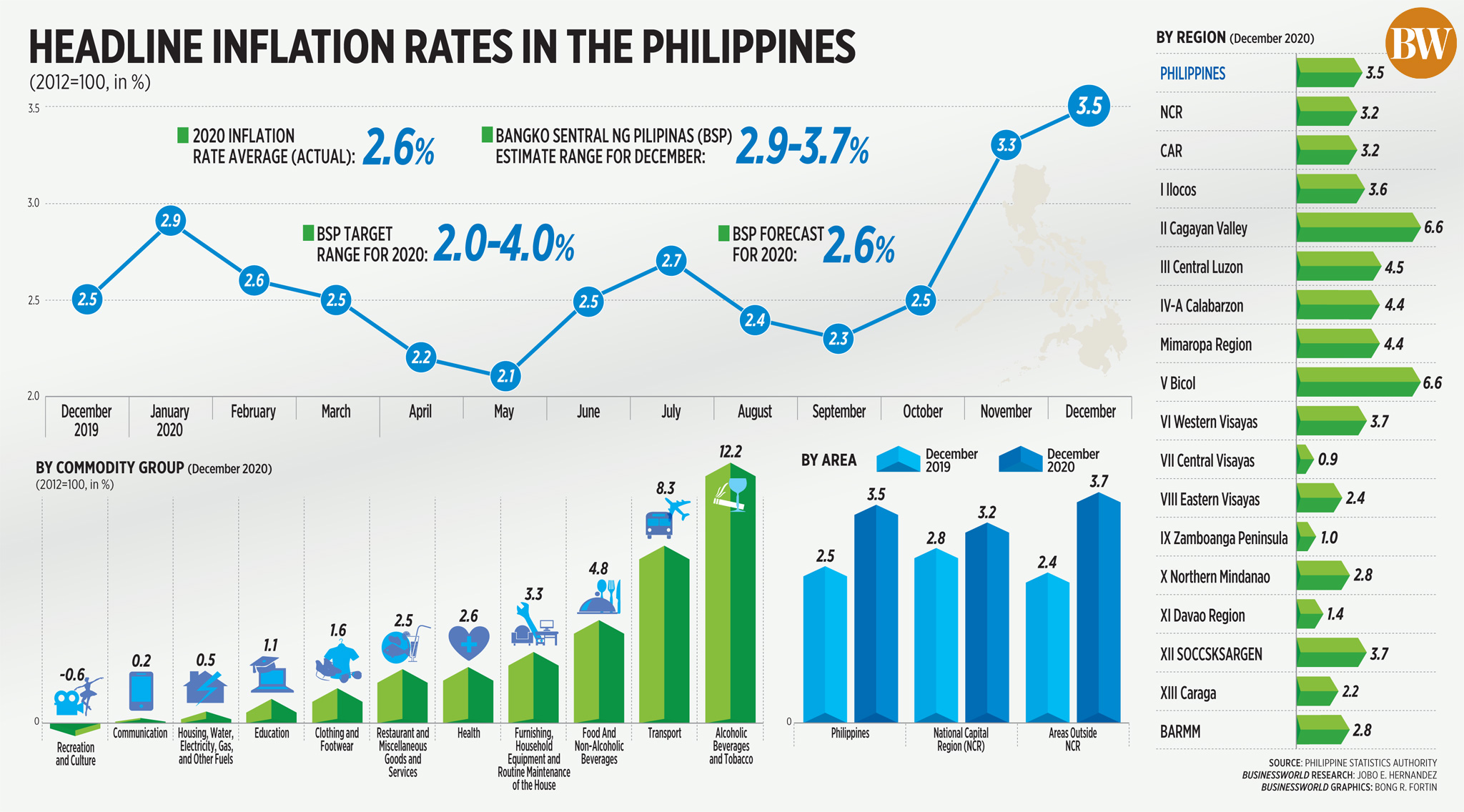 “The main reason for the faster inflation in December is the uptick in the rise of prices of food and nonalcoholic beverages,” National Statistician Claire Dennis S. Mapa said at a briefing.

Rice prices inched up by 0.1%, the first time it posted an increase after 19 months of deflation attributed to the impact of the Rice Tariffication Law (Republic Act No. 11203).

“I cannot tell right now if this is the start of an upward trend [in rice prices]. We will see in the next month or two if it will really go positive,” Mr. Mapa said.

Prices of restaurant and miscellaneous goods quickened to 2.5% in December, from 2.2% in November. Faster annual price increases were seen in meals, personal hygiene items such as alcohol and toothpaste, and barbershop services.

On the other hand, the PSA noted a slowdown in the indices of the following commodity groups: alcoholic beverages and tobacco (12.2% from 12.3% in November); housing, water, electricity, gas and other fuels (0.5% from 0.8%); and furnishing, household equipment and routine maintenance of the house (3.3% from 3.5%).

“The overall balance of risks to future inflation continues to lean toward the downside owing mainly to the continued uncertainty caused by the pandemic on domestic and global economic activity,” Mr. Diokno told reporters in a Viber message on Tuesday.

The BSP chief, however, noted that the upward pressure on food and oil prices might come from a stronger-than-expected recovery, given recent vaccine developments.

“The BSP continues to expect inflation to settle within the target range over the policy horizon,” Mr. Diokno said.

The faster uptick in food prices is seen as a continuing impact of the typhoons and the African swine fever, Security Bank Corp. Chief Economist Robert Dan J. Roces said.

“This cost-push effect — likely transitory as food prices tend to remain sticky going down — coupled with higher demand during the holiday season nudged overall price growth higher,” he said in a text message.

“The higher demand, on the other hand, underscored improved mobility and consumption, and this is good news for the country’s economic managers banking on the legion of consumers to propel recovery,” he added.

Mr. Mapa said the central bank is unlikely to go for another rate cut given the current negative real interest rate environment, but he expects the BSP to keep its accommodative monetary policy.

“With the central bank pushing up its 2021 inflation forecast to 3.2%, we do not expect BSP to adjust its main policy rate soon. However, [Mr.] Diokno did hint at a possible reduction to reserve requirements in the near term,” Mr. Mapa said in a note.

To support the economy during the crisis, the central bank slashed rates by a total of 200 basis points in 2020, bringing down the overnight reverse repurchase, lending, and deposit rates to all- time lows of 2%, 2.5% and 1.5%, respectively.

Mr. Diokno said on Tuesday that the BSP will keep rates low “until maybe the next few quarters.”

Meanwhile, inflation for the bottom 30% income households logged in at 4.3% in December, faster than the 3.6% in November and the 1.9% a year earlier.

The consumer price index (CPI) for the bottom 30% modifies the model basket of goods to reflect the spending patterns of the poor. This compared to the headline CPI which measures inflation as experienced by the average household.