Business relies on contracts, and mistakes made during the preparation of a binding commercial agreement can prove very costly down the line.

It therefore benefits all professionals to understand how contracts are drawn up and what, exactly, all the legal terms actually mean. The good news is that, according to Professor Mark Watson-Gandy – one of the UK’s leading experts on English contract law – the subject can be adequately learned in just one afternoon.

If there’s one image associated with the legal profession then it’s the rows of dusty, voluminous law tomes threatening to break the shelves with their sheer density.

When Simple Contract Law by Professor Mark Watson-Gandy landed on my desk I was, therefore, understandably surprised by just how compact it is.

Upon opening the book, I was further amazed to find not only that the author’s promise that English contract law can be learned in just one afternoon was correct, but also that it was actually enjoyable to do so.

This deft combination of conciseness, information and pleasure is to be applauded as professionals in all sectors discount a familiarity with contract law at their peril.

Every form of business transaction is underpinned by a contract. Often, however, we readily enter into contracts without fully parsing the details, and the legality of those contracts only become tested when there is a dispute between the parties. This is great news for the lawyers and courts, of course, but a potentially costly mistake for businesses, both in terms of legal fees and the wider reputational fallout from such disagreements.

And with the rise of free online contract generator websites, where you may just end up getting what you pay for, it has never been more essential to know what the contract actually states before going any further with a deal.

As a respected barrister as well as legal academic, Professor Watson-Gandy knows better than most the importance of understanding contract law. As he points out in his book, English contract law is the preferred choice for parties not only domestically, as would be expected, but also internationally.

In fact, three quarters of those using London’s commercial courts during litigation come from outside of the UK, and this sector represents one of the UK’s biggest exports, amounting to some £5billion per annum for UK legal services.

The reason for this is simple: English contract law is simple, convenient and straightforward. 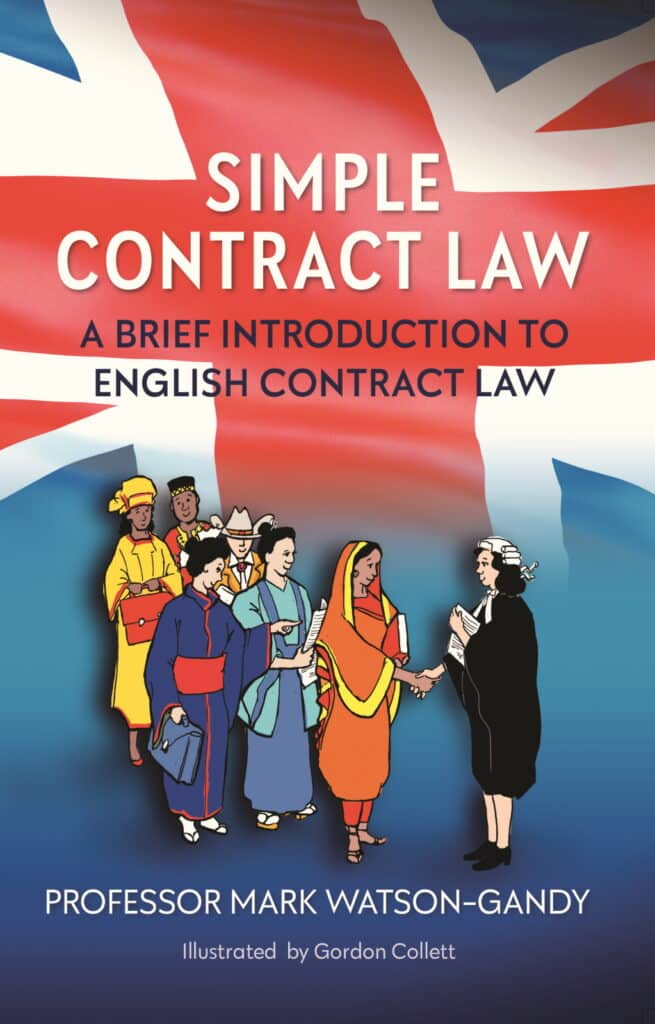 Until now, however, books on the subject have been anything but straightforward. Recognising this, Professor Watson-Gandy – a seasoned barrister based at Three Stone Chambers in London, one of the UK’s leading chancery and commercial barristers’ chambers – set out to provide an “antidote to the dry, laborious legal textbooks”.

He has succeeded admirably because this slim, 104-page guide provides a fully-accessible reference that cuts through the complexity and waffle to demystify English contract law within the space of just a few hours. It is, therefore, the perfect overview to English contract law and, most likely, the only book you’ll ever need on the topic.

The book packs in 20 chapters, commencing with a brief explanation of the importance and value of English contract law, and analysis of the nuts and bolts of contracts, before covering all relevant areas such as necessary formalities; the difference between valid, void, voidable and unenforceable contracts; acceptance; offers; exclusion clauses; and remedies.

For additional guidance there are examples of contracts and a handy glossary of common contract terms and their function.

As well as going through the fundamental elements of English contract law, Professor Watson-Gandy – who is also a Visiting Professor at the University of Westminster – also provides the real-life stories behind the  legal cases that have shaped contract law over the centuries.

These help to illustrate each key principal while being fascinating to read in themselves. For instance, in the chapter discussing ‘Offers’, we learn about the case of Carlill v Carbolic Smoke Ball Co (1893), where a certain Carbolic Smoke Ball Company made a bold advertising claim of a £100 reward to “any person who contracts the increasing epidemic influenza colds, or any disease caused by taking cold, after having used the ball three times daily for two weeks, according to the printed directions supplied with each ball”.

One customer, Mrs. Louisa Elizabeth Carlill, used the product as directed for nearly two months, and then caught the flu. She claimed her £100 but the company refused to pay, until the Court of Appeal found that it was bound by its advertisement, which was “construed as an offer which the buyer, by using the smoke ball, accepted, thus creating a contract”.

The icing on the cake is the witty and charming cartoons provided by Gordon Collett that further illuminate the principles and binding precedents that have formed contract law, such as two cavemen thrashing out the first (verbal) contract for the exchange of a mammoth skin.

The bottom line is that, as professionals, we may well be called upon from time to time to scrutinise a contract or prepare one without a legal professional at hand. Given this, gaining a familiarity with English contact law is a wise decision.

In the final verdict, Simple Contract Law will be of immeasurable value, being one of those books that should always be within arm’s reach.