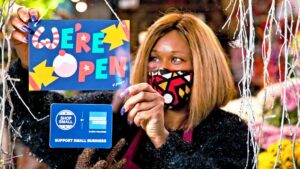 A fire sale by Debenhams is expected to fuel a “Wild Wednesday” rush on the high street today as most retailers reopen for the first time in a month.

The 242-year-old department store chain will offer shoppers up to 70 per cent off after going into liquidation.

Administrators concluded that there was no option but to wind up the business after a rescue deal with JD Sports failed. About 12,000 jobs are now at risk. If a saviour cannot be found before the new year, Debenhams will start emptying its stores and selling fixtures, lights and mannequins in an effort to raise cash for its creditors.

Non-essential retailers have been shut since the start of November when Boris Johnson announced the country’s second national lockdown. Many are expected to respond when it lifts today by offering discounts in an effort to clear the mountain of stock they have been unable to sell.

One fashion chief executive said that Black Friday, the American discount frenzy, had turned into “Black November” and the promotions would stretch until the new year.

Many stores will open for extended hours in the run-up to Christmas to try to catch up on lost trade. Primark will open eleven stores for 24 hours a day after the government relaxed restrictions on round-the-clock trading.

Some chains have hired security staff to control the expected crowds although there remains uncertainty over how busy it will be.

One senior retail figure said: “No one is sure whether to expect a rush or a dearth of customers. We are confident retailers are ready to deal with any crowds, and many will have learned their lessons from previous reopenings.”

Debenhams began its sale online yesterday and was already having to run a virtual queue to manage demand. Its website read: “We will give you 30 minutes to fill your bag and start checkout”.