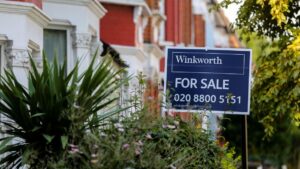 House price growth accelerated last month to the highest level in almost six years but market activity is at risk of slowing sharply.

Despite rising unemployment and signs that the economic recovery lost momentum before the latest lockdowns the market has been buoyed by the stamp duty holiday, which is due to end on March 31 next year. Until then no stamp duty is due on purchases below £500,000; the tax break is worth up to £15,000 for buyers.

The housing market has also been boosted by pent-up demand released when the first Covid-19 lockdown ended in the summer as people sought out larger properties with more outdoor space that were better suited for home working.

Robert Gardner, Nationwide’s chief economist, said that the outlook remained “highly uncertain” and that housing market activity would likely slow in the coming quarters, “perhaps sharply, if the labour market weakens as most analysts expect, especially once the stamp duty holiday expires”.

Mr Gardner said that it would depend “heavily on how the pandemic and the measures to contain it evolve, as well as the efficacy of policy measures implemented to limit the damage to the wider economy”.

“Behavioural shifts as a result of Covid-19 may provide support for housing market activity, while the stamp duty holiday will continue to provide a near term boost by bringing purchases forward.”

Howard Archer, chief economic advisor to the EY Item, said that the recent activity and strengthening of prices would “prove unsustainable sooner rather than later due to challenging fundamentals for consumers, although in the immediate future, activity may still benefit from people looking to make a move in time to complete before the stamp duty threshold increase ends”.

Nationwide has found that almost 30 per cent of prospective home movers were looking to access a garden or outdoor space more easily and a quarter wanted to get away from the “hustle and bustle of urban life”. Government plans to create new national parks in England mean that prices in those areas are likely to rise. Nationwide’s research found that homes located within a national park attract a 20 per cent premium over an “otherwise identical property” — about £45,000 in cash terms, based on the current average UK house price.