THE headline inflation rate in November likely quickened as a recent spate of typhoons pushed the prices of food and agricultural products higher, economists said.

A BusinessWorld poll of 13 analysts conducted last week yielded a median estimate of 2.7%, near the low end of the 2.4-3.2% forecast range of the Bangko Sentral ng Pilipinas (BSP) and well within the 2-4% target for the year.

If realized, the median estimate will be faster than the 2.5% logged in October and the 1.3% seen in November 2019. 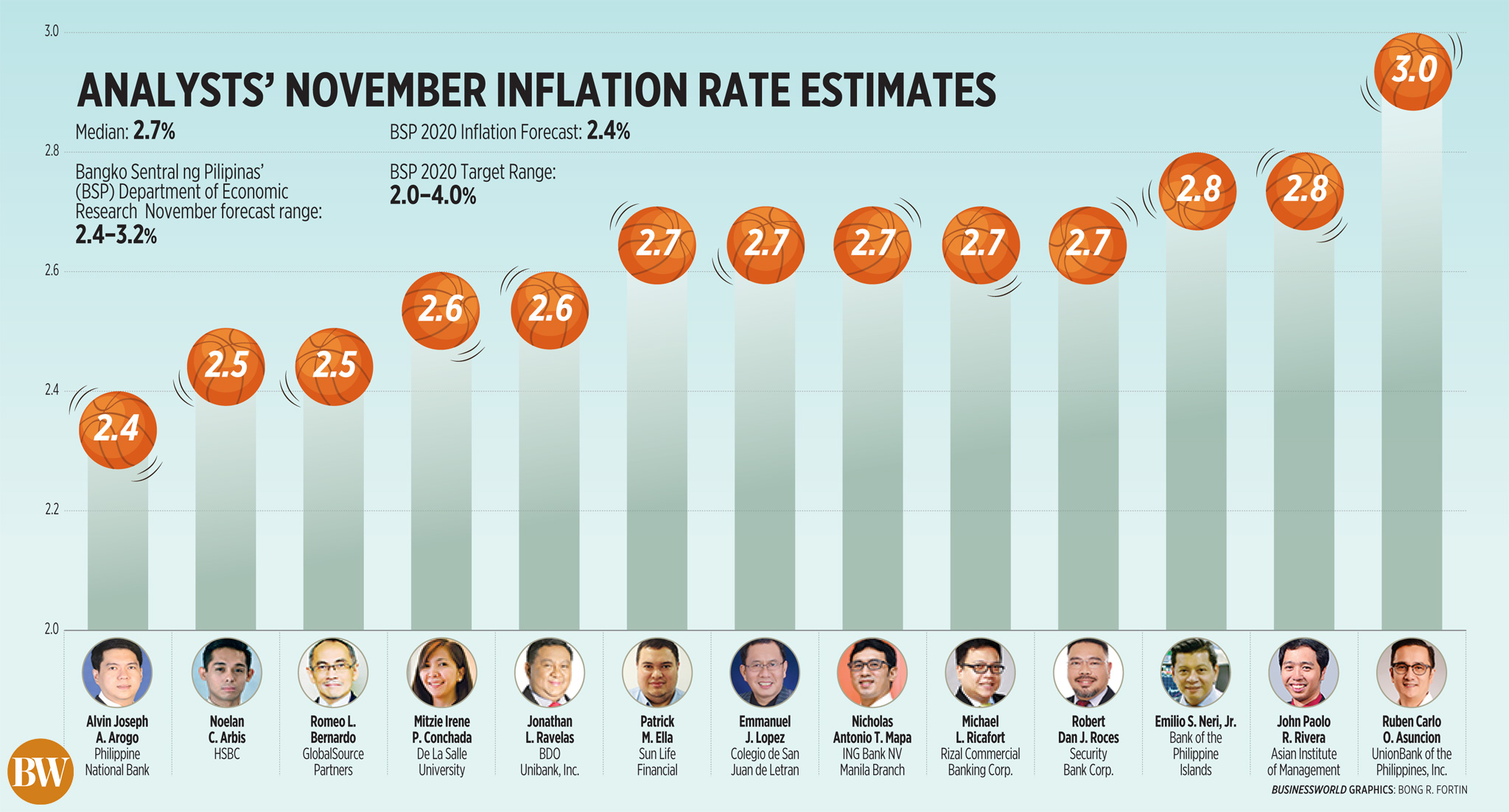 The November inflation report will be released by the Philippine Statistics Authority on Friday (Dec. 4).

Typhoons Rolly and Ulysses swept through Luzon in November, causing heavy floods and damaging crops, homes and infrastructure. Analysts said the recent calamities and its impact on the agriculture sector may have driven a faster increase in commodity prices.

Crop damage from typhoons Rolly and Ulysses reached P5.79 billion and P6.72 billion, respectively, based on latest data from the Agriculture department.

Another upside risk to inflation is the continued rise in crude oil prices in the world market, analysts said.

Last week saw crude oil prices rising to their highest levels since March, according to Reuters. In the local market, prices of gasoline, diesel, and kerosene have increased by around P0.10, P1.40, and P0.30 per liter cumulatively in November, based on data from the Department of Energy.

Manila Electric Co.’s power rates inched down by P0.0395 per kilowatt-hour (kWh) to P8.5105 kWh in November, due to a reduction in generation charges.

Increased household spending ahead of the Christmas season may have contributed to the quicker inflation rate, Asian Institute of Management Economist John Paolo R. Rivera said.

“A much faster inflation is expected since we are drawing close to the holiday season, 13th month pay and bonuses have been released recently driving private consumption upwards, but not as fast as pre-pandemic situations,” Mr. Rivera said.

Analysts said the inflation outlook remains benign, given the BSP some room to remain accommodative if needed.

The central bank expects inflation to average 2.4% this year. The consumer price index rose 2.5% as of October year to date.

The Monetary Board is authorized to slash up to 400 basis points (bps) in the reserve requirement of lenders this year. So far, it already trimmed big banks’ RRR by 200 bps to 12%, while those of thrift and rural banks were brought down by 100 bps to three percent and two percent, respectively.

“The latest BSP forecast for 2020 is 2.4% average inflation. As long the November figure does not result in meaningful deviation from this, it should have negligible impact to the current monetary policy stance of the BSP,” said Alvin Joseph A. Arogo, vice-president and head of research at Philippine National Bank.

The central bank unexpectedly cut key interest rates by another 25 bps in November, citing the need to further stimulate the sluggish economy. This brought down the overnight reverse repurchase, lending, and deposit facilities to record lows of 2%, 2.5%, and 1.5% respectively.

Cumulative easing this year reached 200 bps already, but the BSP said they still have the policy space for further measures once the need arises.

“Looking ahead, the BSP stands ready to deploy its full arsenal of instruments as needed in fulfillment of its mandate to maintain price and financial stability conducive to sustainable economic growth,” BSP Governor Benjamin E. Diokno said on Nov. 19.

The Monetary Board will have its last policy-setting meeting for this year on Dec. 17. — Luz Wendy T. Noble