Above and Beyond: ING-FINEX CFO of the Year Mylene Kasiban 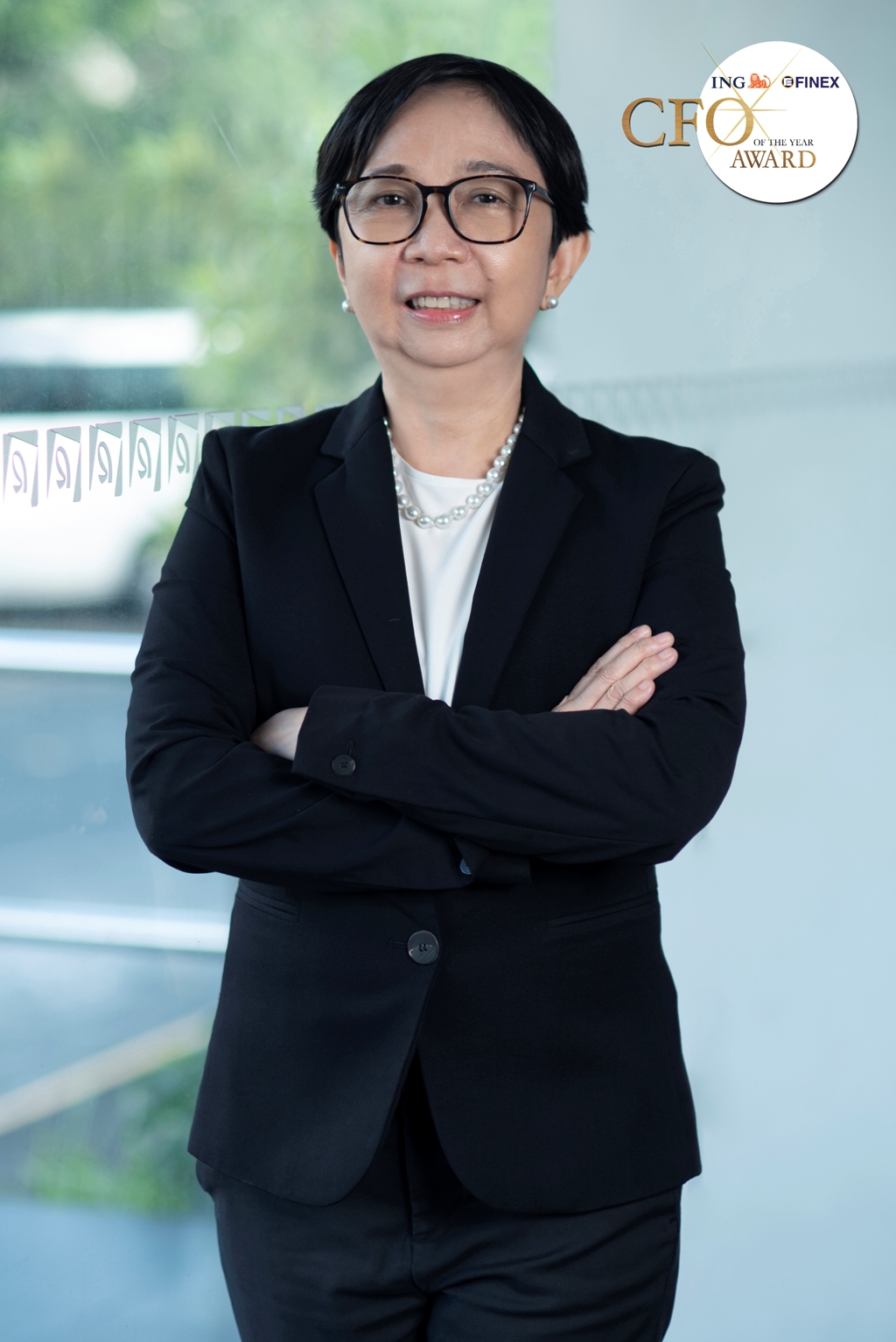 Anyone who has ever worked in a company with a Chief Financial Officer (CFO) might have the perception that the CFO is cold, distant, and kalaban ng lahat (everyone’s enemy). They not only monitor the books; they also screen what gets charged into them. They get stereotyped because this perception is shared among people in different organizations.

But Mylene Kasiban — CFO of Robinsons Retail Holdings, Inc. (RRHI) and the 2020 ING-FINEX CFO of the Year awardee — not only breaks this stereotype, she also breaks the glass ceiling.

A win for Robinsons Retail

“Being in a company with the Gokongwei Group is inspiring and it’s always energizing,” Mylene begins when we ask how she is, post-typhoon Rolly. “I just got off a Gokongwei Group Conversations video with Lance, and it’s all about entrepreneurship and stewardship. I’m feeling good. The way we look at all these challenges is something of learning.”

Mylene speaks with eager and open eyes, as if she does not yet have a career spanning 28 years and working with some of the biggest companies in the Philippines, Indonesia, and Myanmar. She went from auditor to finance manager in three years, and from finance director to group financial controller to CFO in 15 years.

When asked how she feels about winning, Mylene dedicates her achievement to Robinsons Retail. Her personal achievement comes second. “First of all, I wanted it for RRHI. I said I’m gonna do it for Mr. John, for Mr. James, for Lance, for Robina, and for RRHI,” she says.

“She is my adviser. She helps me run our business,” attests Ms. Robina Gokongwei-Pe, CEO of Robinsons Retail Holdings, Inc., when asked about having Mylene as a CFO. “She is very progressive, not the bean-counter CFO. She’s the CFO who always tries to make life easier for the employees.”

“She won’t just hand you your financial statements and leave you there.”

If we were to simplify what made Mylene win the award, it is that — simplicity. She looked at processes and simplified them, benefitting both company and employees.

It was a project she did even before the COVID-19 pandemic hit to simplify the accounting and inventory processes — changing from manual to automated — that helped RRHI and their companies stay afloat while other companies suffered immensely.

“I think even with the pandemic, I’ve managed to preserve our cash. In any business, cash is king,” Mylene says thoughtfully. “There were a lot of interventions that I had to do, but I believe I’ve built a strong finance team as well. I did a mix of hiring people and at the same time growing people from within, and developing them.”

As the second woman to win the award in its 14-year tradition, Mylene also brings women empowerment into the picture. “I really believe that women are leaders on their own, they just have different styles,” she says.

“The award is not just for me, but also for other women who want to be CFO.”

Mylene is the CFO she is today because of the challenges she has overcome, both professionally and personally. As a daughter, she shared with us prior to the recording of the interview that she looks after her parents who are safely and happily settled in Laguna.

As a finance professional, Mylene says there are two achievements that changed her for the good.

“First is my Indonesia experience,” she says. “Because I had worked in the Philippines and had a short stint in the US, I had this picture of what good looks like, and what it feels like working in a multinational company.”

“Although my stint in Indonesia was with multinational companies as well, it’s a much less-developed country during that time, from a business perspective,” Mylene continues. “I didn’t realize that there were a lot of improvements or changes that I needed to make in Finance.”

“It taught me lessons in humility, and socializing — or understanding the culture — for you to be successful. You cannot just come in as somebody who knows everything and impose whatever you learn,” she says, eyes looking up as if she was reliving her time in Indonesia. “You have to understand the culture and adapt. Really be with them and be like them, so I went to the extent of speaking Bahasa.”

The second achievement is when Mylene completed her studies in Bath, United Kingdom. “People were asking me, ‘Why did you choose Bath and why didn’t you go to universities? Like Ox-bridge, Oxford or Cambridge’.”

“Bath was a very nice city, and it gave me the opportunity to relax, travel, study at the same time,” Mylene recalls. “It was a good break, a good reflection. I learned a lot about myself. I learned about religion. I view religion differently now than it was before. I think it was very liberating for me.”

Are you happy, Mylene? We ask her. You look and you feel like you’re at peace.

“Yes, I am,” Mylene answers fast. “Retail is very fast-paced, but I’m happy, I’m at peace. I think you just have to be realistic and be content. I’m happy that my parents are okay, they’re healthy, they’re not affected by COVID-19.”

How does she stay happy, centered, and at peace at a time when business is hard?

“You kinda need to think of how you navigate the company. Our stores were closed for six weeks during the ECQ, but we needed to make sure that we still made money,” Mylene says. “Good thing supermarkets and drug stores were still open. It was a difficult moment, but I took it as more of a challenge, honestly.”

During the lockdown, RRHI launched GoRobinsons, their e-commerce platform, and negotiated the acquisition of Rose Pharmacy. “It wasn’t as difficult for me personally, because I’ve been in difficult moments,” Mylene shares.

In the ’90’s during the political unrest in Indonesia, Mylene was with Johnson & Johnson, and had to move from one office to another despite prevalent bombings. During 9/11, Mylene was with The Hershey Company, and was one of two passengers on a plane to Pennsylvania to present a business plan.

It is her reflective nature and centeredness (other people call this balance) that has helped and still helps Mylene move forward. And, of course, her simplicity. Simplicity is not downplaying the gravity or importance of a situation. It is clearing the clutter and noise to focus on what needs to get done, get it done, and to do it well.

Ways of working in the now

“We’ve always been liquid but I wanted to make sure that we continue that. How do we make sure we provide and make sure that our employees are safe, that they’re able to work while they’re at home?” Mylene shares, when asked how they coped with the first few months of lockdown. “So I worked with Robina on that, in approving budgets for the business units.”

“Until now, of course, for everyone it’s a challenge, but I think it’s normalized already,” she continues. “When I say it’s normalizing, I’ve already transitioned that this is the next normal. I think people’s habits have changed; even the way people shop has changed. You just need to be agile.”

One such proof of agility is the transition to mobile work, with technologies that help them do meetings “face-to-face” albeit virtually. “Now, you have to feel the voice, and rely on facts. We’ve adjusted to that,” says Mylene. “We were more or less set up on that before, we just fast-tracked it. We’re also focused on our online, our e-commerce, on how we’re gonna fasttrack it.”

What Mylene has learned from Robina that she applies in her daily life is to be a steward of the business — hands-on and entrepreneurial. “You have to care for the business, you have to act like an owner,” Mylene says. “You need to think beyond just getting a salary. You need to think, ‘What does it do for the company if I make this decision? Will it help if I do this?’.”

A win to celebrate CFOs

“I think it was also apparent that her various contributions made a relatively larger impact on the health and welfare of her firm. She was resolute in these initiatives,” he says. “It also was impressive that her relationship with her CEO is extremely close, and she is valued as an internal trusted advisor.”

“All candidates (for the award) were asked the same set of questions and Mylene concisely articulated strong evidence of performance, initiative, and behavior across all four CFO qualities of Strategist, Catalyst, Steward, and Operator,” adds FINEX President Jose Jerome Pascual III.

“She developed a very strong partnership with her CEO looking at future scenarios, opportunities, and recovery strategies. She engaged her internal stakeholders effectively and changed their perception on the role of Finance. She established a culture of compliance while adapting to the corporate culture.”

“I see my partnership with Mylene going ahead, going strong, going, and going,” says Robina with a laugh.

This game-changing CFO will indeed keep going, with grit and grace. “I make sure that I train my Finance team to be a business partner, and to have a customer service orientation,” Mylene says. “I’m very much a business partner. I collaborate with the business lead heads and the general managers.”

“I thank Robina for believing in me, for giving me a chance to be part of her team. I’ve always been excited about working for the company, because it’s such a good company and it’s still growing,” Mylene tells us, in closing.

“To ING-FINEX, I am honored that I am the second female CFO of the year, and I will work on living up to the expectation.”

Mylene is petite with an ever-smiling face, but once you dig deep and understand how she thinks, sees, and feels about her work and the people she works with, you will understand that her spirit towers above the rest. That’s what makes her game-changing.

She is exactly what Finance in the new normal needs.