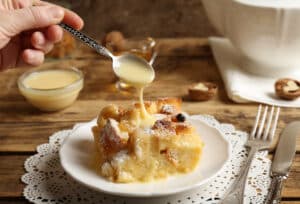 The company behind foods such as gravy brand Bisto, custard-maker Ambrosia and Mr Kipling’s cakes says people turned to comfort foods during the pandemic.

Premier Foods credited “exceptional” demand throughout lockdown for strong sales and profit figures for the past six months.

It said it had gained over a million new customers during the period.

Premier said it was benefitting from the latest lockdown in England, which meant more people were eating at home.

Premier said that consumers had “turned to brands they recognise and trust”.

It also said people had been trying to expand their repertoire of meals cooked in their own kitchens, particularly as new restrictions on eating out had been introduced, which had helped sales of its cooking ingredients.

The food critic and broadcaster, Jay Rayner, said the news was no surprise: “All of us are having to cook many more meals in lockdown – prior to that 30% of our calories were eaten outside the house.

“Many of those doing the cooking were kids 20 or so years before so they are turning to these familiar foods.”

Premier Foods’ Cadbury’s mini rolls were another stand out performer, as it put it, selling in “very robust volumes”.

Chief executive Alex Whitehouse said: “The longevity of this increased demand is likely to be linked to the duration of these new measures.”

The company said it expected to continue to see its income grow and forecast that its full-year profits would beat analysts’ predictions.

It said these grew by 9.4% across the UK in the four weeks to 1 November.

It said that while sales were higher than the same period a year ago, unlike in March, there had been no noticeable spike in the stockpiling of goods this time round.