Millions of Londoners, and residents of Essex will face tougher Tier 2 Covid measures from Saturday, with a ban on households mixing indoors, local MPs have been told.

Ministers are currently being briefed over the new measures in a call with Health Minister Helen Whately.

Households would also be barred from mixing in pubs and restaurants.

It comes as talks continue between the government and local leaders over the expansion of the strictest coronavirus restrictions to more parts of England.

Mayor of London Sadiq Khan said: “Nobody wants to see more restrictions but this is deemed to be necessary in order to protect Londoners.”

He added that there was “simply no other option”, as he told people in London: “We’ve got a difficult winter ahead.”

Health Secretary Matt Hancock will also announce later today that Essex will be moved into the ‘high-level’ tier.

It follows calls from councillors and MPs for more measures to deal with the rising infection rate in Essex, and would mean there would be bans on meeting other households indoors.

Dr Mike Gogarty, public health director for Essex, is one of the key advocates for tighter restrictions.

The new three-tier system sees every area of England classed as being on medium, high or very high alert.

Greater Manchester and Lancashire could join Liverpool City Region and be placed under Tier 3 – “very high”.

MPs in Greater Manchester and London were both invited to join ministerial calls on Thursday morning. 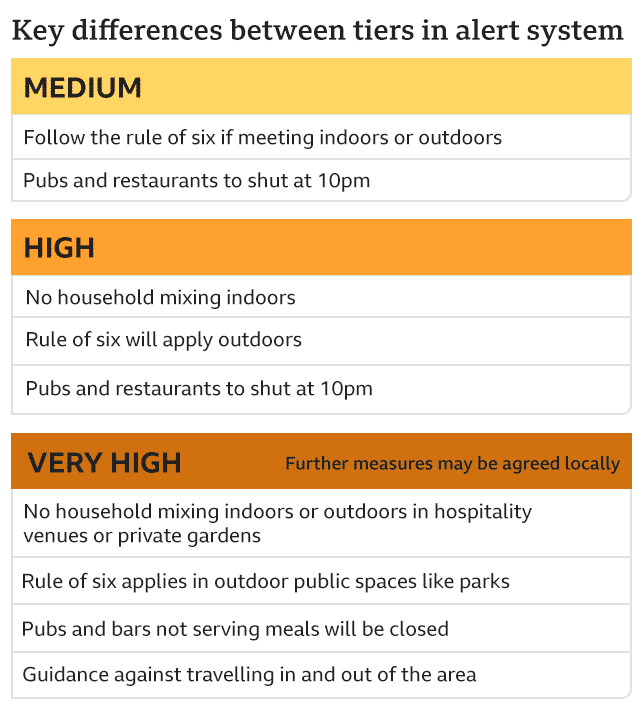