The new top-end Apple Watch Series 6 is slightly faster, brighter and cheaper with a new sensor – and does just enough to stay the king of smartwatches.

Available in two sizes, 40 or 44mm, and in a variety of case materials and colours, it starts at GBP379 in aluminium. Our test watch is in 44mm graphite stainless steel costing GBP699. It requires an iPhone and cannot be used with Android.

The Series 6 follows the excellent Series 5 from 2019, which introduced an always-on display cementing the Apple Watch at the top of a pile and making it a very difficult act to follow. 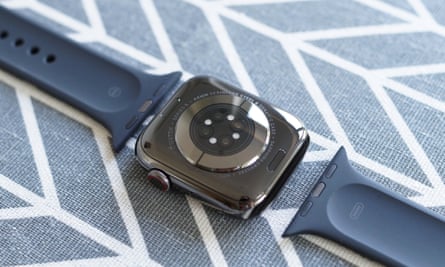 The new watch is essentially the Series 5 with a new blood oxygen saturation sensor on the back – more on that later. It also has a faster chip and a screen that is 2.5x brighter when in the “always-on” ambient mode, which is particularly noticeable outdoors. It comes in some new colours, including a blue or red aluminium. Our test watch, the aforementioned graphite-coloured stainless steel, has a gorgeous, dark lustrous quality to it.

Comfortable to wear, it has a large range of strap options with new styles including the Solo Loop and Solo Braided Loop, which are sized bands without a buckle or clasp that stretch to pull on over your hand. 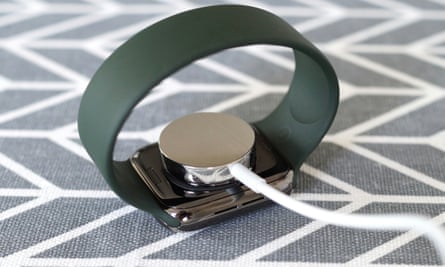 The Series 6 has Apple’s latest S6 chip, which is fast, fluid and beats even the best performance from rival smartwatch makers.

It is up to 20% faster on paper but doesn’t feel much snappier than the S5 chip in the Series 5 and the new Watch SE. It is considerably faster than the chip used in the Series 3, though, which is still on sale.

Battery life is solid if not class leading. With the always-on display active and sleep tracking on overnight, the Series 6 lasts more than 36 hours between charges, including with two manual ECG recordings, two manual blood oxygen recordings, lots and lots of notifications and a 25-minute run.

Sleep tracking overnight consumed between 10% and 12% of battery life, while a 25-minute outdoor run consumed about 4-5% of battery life. The Series 6 charges from flat to 100% in as little as 83 minutes and hits 80% in only 56 minutes using a 2A USB power adapter, which is much faster than the Series 5. 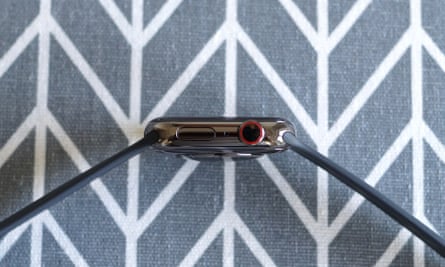 Apple does not provide an expected lifespan for the battery in the Series 6. Similar batteries typically last at least 500 full charge cycles while maintaining at least 80% capacity. The battery can be replaced for GBP82.44 while the watch can be repaired for between GBP286.44 and GBP476.44 depending on the model. The repair specialists iFixit awarded the Series 6 a repairability score of 6 out of 10.

The Series 6 uses 100% recycled aluminium in its case and 99% recycled tungsten in various different components. It does not ship with a power adapter in the box, instead using a standard USB-A cable on its wireless charging puck. Apple is also using renewable energy for final assembly of the watch and breaks down the Series 6’s environmental impact in its report. 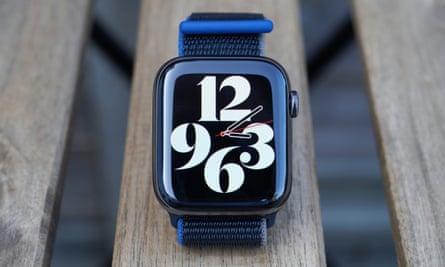 The Series 6 ships with the latest version of Apple’s WatchOS 7, which also runs on the Series 3, 4, 5 and Watch SE.

WatchOS 7 introduced seven new watch faces, plus the ability to share configurations of the built-in watch faces with other users, though I still can’t find any combination of watch face I truly love.

The new software also added full, on-device voice dictation, so that your speech is converted to text faster, with greater privacy and without requiring an internet connection. This includes message replies, when talking to Siri, and other bits. Setting a timer using Siri is now practically instant, putting Samsung’s Bixby and Google’s Assistant on their smartwatches to shame. It still can’t set multiple timers, though, which is annoying when cooking.

Notification handling, including calls, texts and replies to messages is good. The tight integration between the Apple Watch and phone is better than any other smartwatch with an iPhone. That includes Apple Pay and Siri. There are a reasonable number of good third-party apps, too, including Google Maps, Strava and Spotify, but no dedicated WhatsApp app, so you can only reply to notifications not start new conversations from your wrist.

Connecting the watch to the internet – and therefore using apps to their full capacity – is done either by the watch being within Bluetooth range of the iPhone, being on wifi or having a 4G eSIM in the device. Once you are connected by one of those three, then everything works, including notifications from your phone.

Most of the watch’s functions, such as health and fitness tracking, also work completely offline. So if you are out for a run without your phone, it tracks where you are and can give you the stats you need. But you won’t be able to get messages or see where you are on Apple Maps, unless you have a 4G plan for your watch. For runners who use Spotify – there is a problem. The watch can download songs from Apple Music to its 32GB of total space so you can listen to music offline but not so for Spotify. 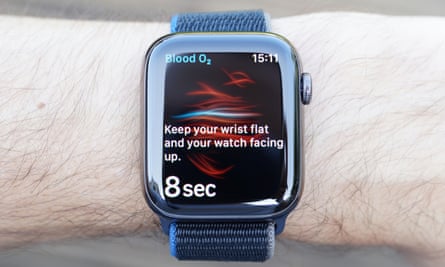 On top of the heart rate and electrocardiogram (ECG) sensor from the Series 5, the Series 6 has a new sensor on the back that measures the oxygen saturation of your blood, known as SpO2. To measure it you have to manually activate it on the Series 6 and stay still with your wrist on a table for 15 seconds. It worked reliably for me and consistently gave me readings in the expected healthy 95%-100% range, although I cannot vouch for its accuracy compared to proper, medial SpO2 monitors that clip to the end of your finger.

In theory, the watch shows how oxygenated your blood is and by inference, how well your lungs are working, or how well your body is adjusting to high altitude, which is where SpO2 sensors are typically used in a wellness setting. Quite a few high-end running or triathlon watches feature the sensor for that purpose.

SpO2 can also be used combined with other sensors while sleeping to detect breathing disturbances such as sleep apnoea, which rivals such as Withings are currently clinically validating. While the Series 6 does measure your SpO2 periodically through the night it simply records readings without combining with sleep data. 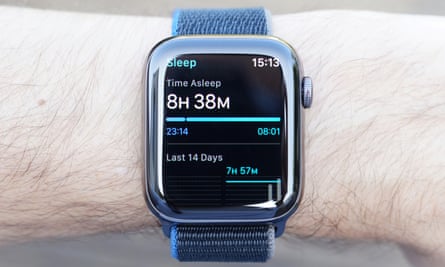 The new sleep tracking is disappointing, however. It is basic and restrictive compared with rivals from Fitbit, Samsung and Withings. The Apple Watch tracks how long you are asleep but doesn’t provide estimates of your sleep pattern (light, deep, and REM sleep) or offer smart-alarm functions that can wake you in the morning in an optimum sleep phase – only a simple set-time alarm. It also forces you to use Apple’s sleep schedule function, which sets a bedtime and wakeup time and turns on do not disturb (DND). Trouble is, if you’re having a lie-in the schedule turns off DND at your allotted time and you immediately get woken by alerts vibrating your wrist.

The software update also added a very useful handwashing feature, which uses on-device AI to detect when you are washing your hands using your motions and the sounds of water and soap timing you 20 seconds and logging it in the Health app. It can also remind you to wash your hands when you get home.

The rest of Apple’s comprehensive health and fitness-tracking features from previous generation Apple Watches return. The Series 6 will track many different sports and has long enough battery life to see most through a marathon. Note you can play music from Apple Music straight from the watch without your phone but not Spotify. 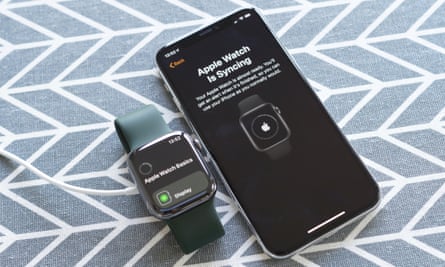 The Apple Watch Series 6 comes in two sizes, various different materials and models with the option of 4G that requires an eSIM and compatible phone plan add-on.

The Apple Watch Series 6 is the best smartwatch on the market for an iPhone.

It has better integration with the iPhone and is fast, fluid and responsive in a way that many rivals simply aren’t. It is extremely comfortable to wear and receives meaningful software and feature updates, and will do for an extended period of time. Third-party app support is pretty healthy.

It is best-in-class for general heath-tracking functionality, makes most of it easy to use and understand. Sleep tracking, though, is too basic compared with the competition and, frankly, I’m not sure it is worth the battery and charging hassle in its current form.

Apple’s fitness activity tracking is very good. It won’t beat a dedicated running or triathlon watch for battery life, utility, data or practicality but it isn’t so far off that more casual runners won’t be happy.

The problem for the Series 6 is that the previous Series 5 and Series 4 versions, and the new cheaper Watch SE, are just as good on this front. The ECG function is useful for those worried about their heart but outside of testing, I’m highly unlikely to use it regularly.

The new blood oxygen sensor in the Series 6 hasn’t won me over; it just doesn’t produce useful data in its current form unless you’re going for altitude training – at which point you’re probably strapping a Garmin to your wrist, not an Apple Watch.

The always-on screen is also noticeably brighter when not actively using it and the battery life will reliably see you through a day and half. The Series 6 is also GBP20 to GBP50 cheaper than the Series 5 at launch.

It isn’t a massive upgrade over a Series 5 or even the Series 4 but the Apple Watch Series 6 is the best smartwatch you can buy right now if you use an iPhone.

Cons: expensive, only works with an iPhone, sleep tracking not great, blood oxygen data not that useful. 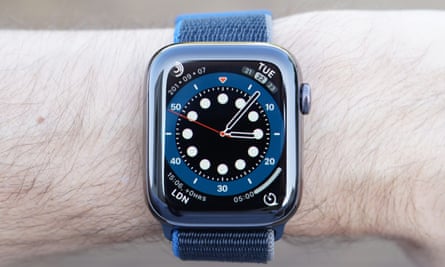