AMID THE LIMITED economic activity in the second quarter, the country’s biggest banks became less profitable as they boosted loan loss reserves with soured loans on the rise and issued loans being the slowest in seven years.

The latest edition of BusinessWorld‘s quarterly banking report showed the combined assets of 46 universal and commercial banks grew 7.56% to P18.165 trillion in the April-June period, from P17.837 trillion a year earlier.

The second-quarter asset growth was faster than 7.06% in the first quarter, but was slower compared with 9.71% a year earlier. 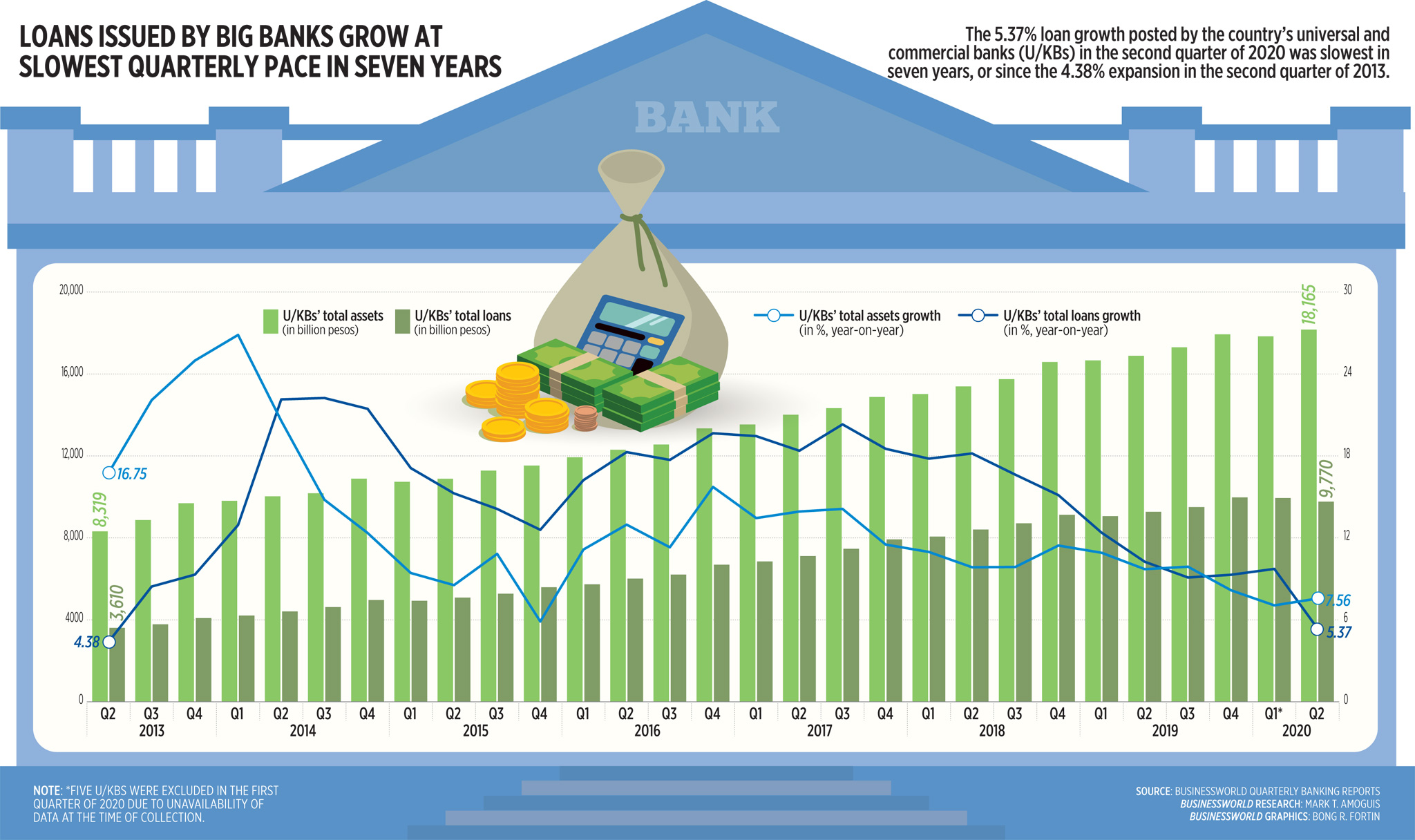 In terms of profitability, the median return on equity (RoE) slipped to 4.89% from 5.17% in the first quarter and 9.13% in the second quarter of 2019. RoE measures how well a company makes use of the money from shareholders to generate income and is calculated as the ratio of net profit to average capital.

BDO Unibank, Inc. continues to have the most assets among big banks at P3.263 trillion, followed by Metropolitan Bank & Trust Co.’s P2.338 trillion and Bank of the Philippine Islands’ (BPI) P2.246 trillion.

BDO likewise issued the most loans in the second quarter at P2.19 trillion, followed by BPI at P1.426 trillion and Metrobank at P1.303 trillion.

BDO had the most deposits with P2.608 trillion. LANDBANK came in second at P1.923 trillion, followed by BPI at P1.764 trillion.

Soured loan — gross bad loans in proportion to total gross loans — worsened to 2.02% in the second quarter from 1.93% in the preceding three months.

Similarly, their nonperforming asset ratio — nonperforming loans and foreclosed properties in proportion to total assets — went up to 0.91% from 0.86% in the previous quarter.

As a percent of total assets, foreclosed real and other properties inched down to 0.3%.

Commercial banks’ ability to absorb losses from risk-weighted assets also improved as their median capital adequacy ratio — a measure of bank solvency — rose to 20.65% from 18.33% in the preceding quarter.

The ratio remains well above the regulatory minimum of 10% set by the BSP as well as the international minimum standard of 8%.

BusinessWorld Research has been tracking the financial performance of the country’s big banks on a quarterly basis since the late 1980s using banks’ published statements.

The full version of BusinessWorld‘s quarterly banking report will soon be available for download on www.bworldonline.com.