The Oculus Quest 2 is Facebook’s second iteration of its popular standalone virtual reality headset. It is more powerful, has a better screen and is cheaper, ready to be your ticket to a virtual escape from the misery of Covid-19.

The Quest 2 costs GBP299 and comes with everything you need to start playing – there’s no powerful gaming PC required. The original Quest released in 2019 marked a defining moment in the evolution of VR breaking it free from the shackles of cables and expensive computers – and proving more popular than expected in the process.

The new headset looks much the same as its predecessor but is 10% lighter at 503g and made of light grey plastic rather than black. It is a set of goggles with a foam faceplate and elasticated straps that fit over your head and round the back so you wear it a bit like a baseball cap. 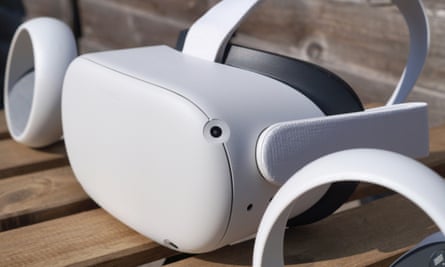 New for this year is a higher density, faster screen that has 50% more pixels than its predecessor and will run up to a 90Hz refresh rate, much like 2020’s top-end smartphones. That means the picture inside the headset is appreciably sharper, crisper and smoother, matching the experience you’d get in Oculus’s PC-based Rift S headset. It looks really good and existing games from the Quest library automatically benefit from the improvements, running at a refresh rate of 72Hz initially with an increase to the full 90Hz coming soon via a software update.

Adjusting the headset is simpler now too. The head strap has two clips you slide apart to tighten while the top strap is velcro. The lenses have three set positions to adjust the interpupillary distance (IPD), which is the distance between your eyes. Oculus says 95% of people should find a position that’s comfortable for them. 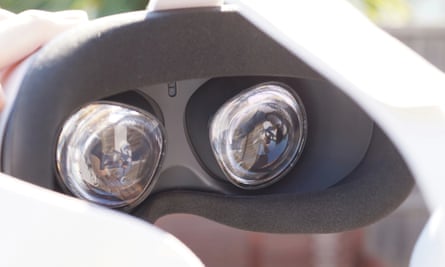 A decent set of stereo speakers are built into the side arms of the strap and produce immersive positional audio. If you want to be isolated you can plug a regular set of headphones or earbuds into the headphones socket on the side of the headset, but I liked being able to hear a little bit of the real world as I played.

Setup and wearing it 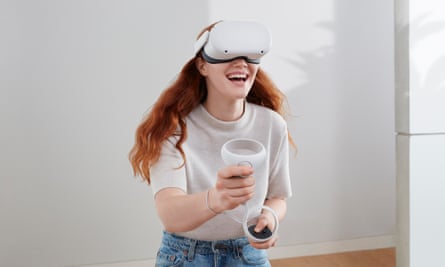 Setting up the Quest 2 is fairly simple, but you need to use the Oculus app on an Android or iPhone to do so and it requires that you log into your Oculus account using a Facebook account, a controversial change introduced in the last month.

Connect the headset to your wifi, pair it with the app and you’re ready to go. The headset and controllers turn on when you put them on. You choose whether to play standing up or seated, and then set up virtual safety zone called the “Guardian”. Move your head or arms near the edge of the zone and a virtual wall appears marking out the extent of your play area so you don’t bash something in the real world while you’re trying to do something in the virtual space.

Oculus recommends a 2 sq metre space in which to play for standing “roomscale” experiences, but the largest space I have to play in is just 1.4 metres by 2.5 and it works fine with a bit of care and awareness of my surroundings.

The Quest 2 is the first VR headset I’ve tried that doesn’t leave goggle marks on my face after an hour or so, remaining comfortable, if a little sweaty, after a solid two-hour play session.

In the box you have a spacer you can insert to make room for glasses. Oculus also has a collection of optional accessories to customise the headset’s fit. These include a halo-type strap, different face pads, an additional battery pack that attaches to the back of your head for doubling the battery life and so on. 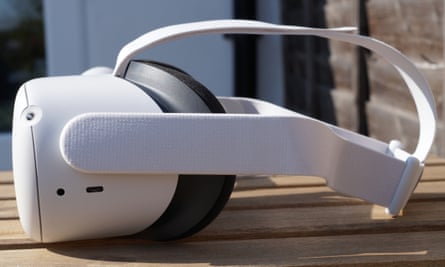 The Quest 2 has Qualcomm’s latest Snapdragon XR2 system which is more powerful than its predecessor, based on the current top-of-the-line Snapdragon 865 processor found in 2020’s flagship smartphones. It also has more RAM and your choice of 64GB or 256GB of storage, plus the latest wifi 6 standard.

Performance all round was good. Jumping into and out of games was smooth. Existing Quest games ran just as well if not slightly better on the Quest 2. The fans that keep the headset cool were fairly quiet: I could hear them when I took off the headset but not really when wearing it.

The headset lasts about two to three hours between charges, depending on what you’re playing. A game of Arizona Sunshine would drain the battery in about two and a half hours, which was frankly long enough for a continuous play session.

Facebook does publish annual sustainability reports and recently pledged to cut emissions to net zero across all of its operations. 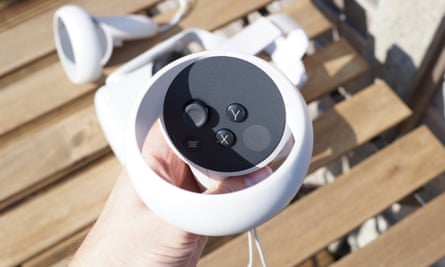 The Quest 2 replaces the original Quest as Oculus’s dedicated VR hardware, but both headsets run the same Quest software platform. That means that all of the games and apps that are available for the original Quest are available for the Quest 2, and that the former headset will not be left behind. Oculus says that it will support both headsets as one platform for the foreseeable future.

The Quest 2 therefore has quite a large library of quality VR titles ranging from indie games to big-name brands that are increasingly coming on board. Oculus said the original Quest sold so well it couldn’t keep up with demand and that developers report the platform has become their most profitable.

In an industry that is still fairly niche, a profitable platform is a very positive step towards a healthy ecosystem for developers which means better games and apps for users.

The Quest 2 already has a bunch of killer apps that make it worth playing. The original Oculus Rift hit Robo Recall is just as good on the Quest 2, while music-slashing game Beat Saber is arguably its best on the headset as is rhythm shooting-gallery game Pistol Whip.

The Star Wars Vader Immortal adventure series is really good too, while Arizona Sunshine is an engaging romp through a zombie-filled landscape. VR classics such as SuperHot VR, Fruit Ninja, Keep Talking and Nobody Explodes are available too. The recent Tetris Effect is pretty addictive, while Star Trek Bridge Crew, Job Simulator and Cook-Out offer completely different experiences. Several sports games and a new wave of fitness-focused titles are there if you want to get a bit sweaty too.

In development are games such as Population: One, which is a fun large-scale battle royale game (think Fornite). It solves the problem of motion sickness caused by the disconnect between motion in the game and your lack of motion in real life by using a tunnel-vision system developer BigBox calls FreeMotion. As you run in the game your field of view narrows to home in on the centre of your vision as it turns out that its your peripheral vision is the primary cause of motion sickness. It works very well and allowed me to run around, climb, fly, shoot and explore for an hour with no ill effects.

Some games are single player, some can be played cooperatively or are multiplayer, while others, such as Beat Saber are best shared with others on a play-and-pass basis. You can cast what you see in the headset to a smartphone, tablet or Chromecast to share the action while you play too.

The beauty of the Quest platform is that it is a VR games console. You simply buy and download a game via the Oculus smartphone app or website, or on the headset itself, then launch and play. There’s no messing with drivers, no quitting apps or struggling with performance inconsistency that can plague PC-based VR. 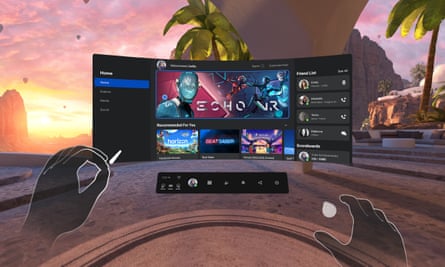 The Quest 2 can recognise and track just your hands too. So you can point, prod and manipulate things without a controller. Pinch your thumb and index finger together to grip, say for scrolling through a list, or turn your hand towards your face and pinch to activate the Oculus menu. Games are mostly controller-based, but navigating the interface with your hands is simply great.

While the Quest 2 is a all-in-one VR solution, you can also connect it to a PC using a USB-C cable and the Oculus Link software, which effectively turns the headset into a Rift S. That way you can play all the Rift-platform games plus those from other platforms, such as Valve’s Half-Life: Alyx. 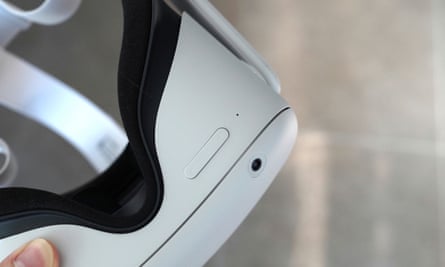 It is available for pre-order now and ships on 13 October.

The Oculus Quest 2 is very much what the world of virtual reality needs right now. It is a cheaper, lighter, more comfortable and simpler VR headset that is genuinely great.

The consolification of VR is what it needs to go mainstream. Cut the cables, remove the complexity and just give people a new, worthwhile experience. Right now the Quest 2 and its swelling library of games, apps and experiences has the potential to provide people with a level of escapism beyond regular games or movies that’s sorely needed in our confined and uncertain Covid-19-dominated world.

I couldn’t leave the house but I explored a sun-drenched Arizona, the depths of a lava-covered planet and the streets of a virtual city, and felt refreshed and invigorated by it.

It is not quite a night-and-day upgrade from the original Quest and it is not designed to be. Instead it is a refinement on every level built to continue the Quest platform, which is rapidly becoming the go-to for great VR games and experiences. For people looking for something new the quality VR experiences are now ready for prime time.

At GBP299 the Quest 2 is a really great VR headset at a much more affordable price and designed with mainstream players in mind, which building on the success of its predecessor is likely to be a hit.

Cons: Facebook account required, VR not for everyone, difficult to repair, battery life could be longer, charging could be faster. 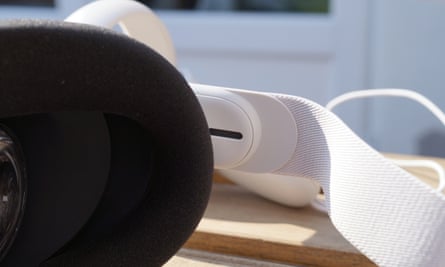