A glimpse into the intricacies of polymer concrete industry: ubiquitous sustainability trends to drive construction market contenders toward product adoption

The recent Indo-U.S. agreement to build six nuclear power plants in India is irrefutably one of the most promising indicators signifying the enormous potential of the global polymer concrete industry. In essence, polymer concrete is widely used in the construction of nuclear power plants, industrial tanks, marine infrastructure and linear drainage systems due to its superior characteristics such as greater strength, durability and pliability, qualities that are increasingly in demand in the expanding global construction industry. Besides, polymer concrete is also becoming expansively popular due to its relative eco friendliness, a characteristic that is rarely found in construction products.

Sustainability is yet another feature in consideration that has added a significant boost to the global polymer concrete market as the cement industry has been struggling to fit into the contemporary demand of veering toward sustainability that will ultimately help in the war against climate change. Aggressive urbanization and rapid industrialization have played their parts in the expansion of the construction industry, especially in Asia Pacific and the Middle East, thus adding an indirect impetus to the worldwide polymer concrete industry.

How have the rising construction activities in Asia Pacific and Middle East helped augment the commercialization landscape of polymer concrete industry?

In recent years, investment in infrastructure has acted as a significant stimulant for economic development in Asia Pacific countries. Emerging economies of the Asia Pacific are directing all their resources in the development of national infrastructure and urban centers that are the hub for future economic growth, which has undoubtedly raised the remuneration portfolio of the overall polymer concrete market. Countries like China are not only focusing on the growth of national infrastructure but have launched such projects that have compelled developed nations to take a renewed look at the development of their own infrastructural capabilities. One such instance is the Belt and Road Initiative by China. 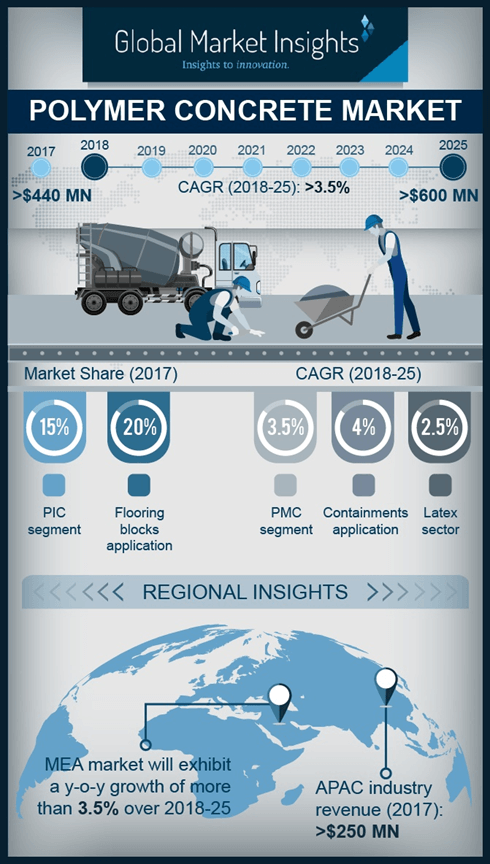 The Chinese government plans to spend approximately $1 trillion on the Belt and Road Initiative (BRI) in order to expand and control transport routes for export goods from China. Since the announcement of the Belt and Road Initiative in 2013, Chinese contractors have invested in numerous overseas infrastructure projects. The China International Contractors Association claims that in 2017 Chinese contractors concluded 13,267 construction contracts across the globe while 7,217 construction contracts were concluded along the Belt and Road.

Ambitious infrastructure projects such as the BRI are being rapidly linked to the growth of the global polymer concrete industry. Another similar instance is the cement plant in Kazakhstan which was built as a joint venture between Kazakhstan and China. The plant is necessarily a demonstration of how through the BRI, China is taking its manufacturing footprint well beyond its own borders and reshaping industries in the process. Analysts rightly claim therefore, that China is set to be a major growth ground for the expansion of the global polymer concrete industry.

Infrastructure development is in full sway in other Asian countries as well, like India for example, where polymer concrete industry has witnessed expansion due to the novel means the product offers to resolve the fly ash problem the country is facing. Indeed, fly ash is produced in huge quantities by the coal-based power plants in the nation. The National Thermal Power Corporation (NTPC) in 2018 announced the Indian Road Congress to have sanctioned the construction of geopolymer concrete roads. These roads, that are to be extended all across the country and aimed to be a valuable addition to the nation’s infrastructure, would also be useful in reusing waste generated from thermal power and steel plants.

The roads will also contribute to lower CO2 emission as fly ash will be used instead of cement as a binder and no water curing will be required. Due to negligible shrinkage in geopolymer concrete, cracks would also not appear on the constructed roads.

Apart from the APAC, the global construction industry is recording explosive growth in the Middle East zone. Indeed, strong State support, higher market demands due to demographics and diversification of interest beyond the oil industry has led to a paradigm shift in the growth of the construction market in the region, creating a favorable scope for the expansion of polymer concrete industry. A combination of such encouraging factors has led to the increase in investments in both infrastructure and capital projects. The Gulf Corporate Council countries, additionally, have also increased focus on social infrastructure, transportation, and tourism which will gradually widen the scope of expansion for the regional construction market, in consequence, influencing the revenue potential of the global polymer concrete industry.

Construction industry vs climate change: a case in support for the expansion of polymer concrete market

According to experts, two tons of raw materials like limestone and shale are required to produce 1 ton of cement which leads to a release of approximately 0.87 ton of CO2 besides significant release of other particulate matters that can consequently be harmful to the respiratory tract when inhaled. With Portland cement production estimated to account for 7% of total global CO2 emissions (nearly 23 billion tons), construction material industry veterans have come to realize that for the industry to remain consistent on the expansion radar, it would need to make significant progress in reducing CO2 emissions through improvements in process technology and enhancements in process efficiency. Considering that CO2 emissions are inherent in the calcinations of limestone, using traditional raw materials can prove to be severely limiting to the growth of the construction industry in a sustainable manner.

The raw materials and energy that the contemporary cement industry uses are mostly non-renewable, and the manufacture product is mostly non-recyclable. However polymer concrete uses abundantly available waste by-products from thermal power plants, fertilizer units and steel factories such as fly ash and slag, thus not only re-using waste but also reducing energy consumption and raw material cost.

Increasing construction activities around the world and finding ecofriendly means to do the same are not the only objectives of the construction industry or the government of any country. Maintenance of existent structures is equally important, and not surprisingly, the global polymer concrete market has received an impetus in this regard as well, due to the contribution of the product to this end. The technology of overlaying highways and bridge decks with polymer concrete has become a well-known practice that helps to extend the life spans of bridges and highways thus saving the important infrastructural elements from the need of re-constructions. Since polymer concrete has adhesive properties, the material can be used in the coating of conventional cement type concrete as well as previously installed polymer concrete layers thus replacing the use of cement as a binder.

Reducing the need of reconstruction is yet another means of reducing energy consumption and raw material requirement and a sustainable approach to the future of construction, since less maintenance of existing structures means greater investment for new constructions and less pollution due to maintenance. As the construction industry evolves to include the usage of technologically advanced materials, polymer concrete industry is expected to witness greater scope for growth across myriad verticals.